Can I Keep A Knife In My Car? Find Out What The Law Says 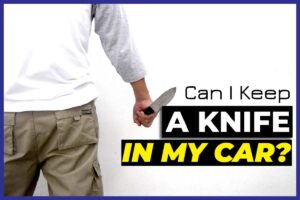 A knife boasts diverse uses. You can use it to defend yourself, cut fruits and vegetables or even cut yourself loose under challenging situations.

There’s a knife in every home. Without it, cooking won’t be possible. However, certain items are illegal when carried or used outside the home. The penalty for having the said item could be jail time, a heavy fine, or both.

A knife is a weapon, and as such, moving with one could be a serious crime. So, if you’re planning to carry a knife, but you’re not too sure of what the law says, you’re in the right place. Please read before you take any knife outside your home.

Yes, you can move around with a knife in your car. But don’t get too excited yet until you finish reading the next few lines.

Knife laws differ from state to state. So, if you’re traveling to another state within the United States of America, read the state’s knife law to make an informed decision.

However, you can move around with a Swiss army knife, utility knives, or multi-tools that boast a knife. But here’s the thing. Make sure the blade is shorter than 2.5 inches. You can move with such a knife almost anywhere in the United States of America.

So, please note that knife laws are comprehensive. Factors that can determine whether you can keep a knife in your car include where it’s located in your vehicle, knife type, length, style, and how it opens.

Finally, keep in mind that gravity knives, which open mechanically, are illegal in some states. These include switchblades, gravity knives, and ballistic knives that shoot blades out of the knife’s handle.

Continue reading to know more about knife law. It could prevent you from getting into trouble with law enforcement.

What Knife Type Is Legal In The United States of America?

Knives come in various types, styles, and lengths. And if you’re not careful, you can make the wrong choice that will get you into trouble with law enforcement.

In the United States, different municipalities, which include states and cities, boast various knife laws. But in general, you can move around with the following knives without getting into trouble.

The multi-tool device comprises devices with knives. Please note that knife length plays a crucial role. It doesn’t matter whether it’s a Swiss or utility knife. Your knife has to be 2.5 inches or less. Otherwise, you may run into trouble with law enforcement.

Can I Carry A Fixed Blade Knife In My Car?

Yes, you can. You can move around with a fixed blade knife. No law enforcement will harass you, even if they spot the knife in your car.

But keep in mind that knife length is crucial. Your knife must not be longer than the one considered legal in your state of residence.

In the United States, knife length usually ranges from 2.5 to 12 inches. Some states don’t have a length limit. Keep that in mind.

The Different States And Their Knife Limit

Here are various regions in the United States of America and the knife length considered legal. If you wish to keep a knife in your car for protection or whatever reason, you need to read this.

A Handy Tip: If you’re caught with a knife considered illegal in any state, mind your response to the officers. Your answers will determine if securing your release would be complicated or straightforward. Never state that your reason for carrying the knife is for self-defense. Remain silent and request an attorney. Do not sign any document unless instructed by your attorney.

Places Where Carrying A Knife Is Against The Law

Even in states where it’s legal to move with a specific knife length, there are places you can’t visit with a knife. It doesn’t matter the knife’s length or style. It’s not just legal to carry a knife in such places.

These are places where it’s against the law to carry a knife.

The only individuals allowed by law to carry a knife when visiting a military base are military men and women. It doesn’t matter the rank they’re in.

So, if you’re visiting these places with a knife in your car, thread carefully. Keep your knife at home before visiting, or better still, you can park your car somewhere far away from these places.

To fully understand knife laws, including their interpretation, let’s define what ownership and carry law means.

What are carry laws? These laws clearly define the type of knife individuals are legally permitted to be with outside their homes. On this, each state has its rules.

The law defines what visitors and citizens can carry about, including how they should carry it. In a state, people might have permission to conceal carry their knives or carry them openly.

That’s how it is. So you must understand the carry laws in your state. Do this before leaving your home with a knife, irrespective of the intended use.

The second term is the ownership laws. What do the owner laws mean? These laws forbid individuals from owning certain knife types, considered dangerous.

Where To Keep A Knife In Your Car

Most people choose to carry a knife in their car for self-defense and emergencies. But if you can’t keep the knife within reach, the knife would be useless.

Wherever you place your knife within your car, ensure it’s in the right place. That is where you can quickly get to it.

A Handy Tip: Laws in the United States can be somewhat confusing. Each state has its law regarding knives. However, according to most laws, carrying a weapon in a vehicle, be it a knife or firearm, automatically categories them as concealed.

Now here’s the thing. In most states, individuals are required to possess a concealed weapon permit. Without it, you can’t keep a weapon such as a knife in your car.

In places where concealed weapon permit isn’t required, the primary focus is on the knife’s length.

Top 5 States With No Limit On Fixed Blade Knife Length

In these states, citizens can move around with a knife. You can carry it in your car or on your person. No law enforcement agent would harass you. Let’s look at the various regions, including what their knife laws state.

If you’re over 18 years, you’re of legal age to concealed carry a knife. You can move with knives that boast a double or single-edged blade. No one would dare to question you. However, it’s illegal to keep a knife when intoxicated. You could get arrested for that. Idaho also allows automatic and switchblades, including folding knives.

This state permits the carrying of automatic and switchblades, including folding knives. However, ballistic knives and throwing stars are not allowed. Taking a knife to school premises is unlawful. It doesn’t matter the knife’s intended use.

The knife law is quite interesting in this state. You can say it’s the most interesting in all the states in the country. Residents and visitors have the right to carry weapons such as knives to defend their properties and family. Residents can even display their knives on their private property. Examples of such knives include swords, dirks, and daggers, machetes, throwing stars, and throwing knives.

Knife law also favors citizens in this state. It permits the carrying of knives for recreational activities, such as fishing and hunting. Citizens can also carry weapons such as knives to defend themselves. Examples of such knives considered legal include dagger, belt, gravity, folding knives, automatic, including the switchblade knives.  Alabama – In this state, residents, and visitors have the right to carry a knife. The law even permits the carrying of knives in public areas such as airports and bus terminals. Knives considered lawful are ballistic knife, pocket knife, dagger, dirk, butterfly knife, switchblade, and stiletto.

So, is it possible to keep a knife in a car? We hope you now know the best answer to this question after reading this post. Knife laws in the United States of America are complicated. That’s something you should know.

Each state has its knife laws. So, it’s crucial to understand what the law states in your area of residence before keeping a knife in your car. Do so to avoid getting into trouble with law enforcement.

Previous Article
Dining Chairs Height: Read This Before Buying Your Dining Chairs
Next Article
How To Fix A Broken Metal Bed Frame: Read These Simple Tips

Can You Eat Coffee Beans: Read What We Discovered
Jacob Lindsey March 27, 2021